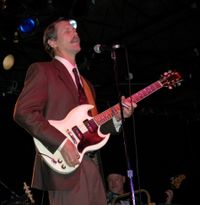 Gene Hardage got a guitar at 13 and was self-taught

with the help of friends and the typical teenage obsession

with music.  In his early 20's he started playing in bands and occasionally doing gigs with a great blues harp player known as Rock Bottom and then eventually

becoming the guitar player in his band the Jungle Bushmasters.

Rock Bottom gave everyone silly stage-nicknames and when Gene Hardage

In 1987 when the Russian Chernobyl disaster was spewing radio active

fallout all over Scandinavia, it was a major turning point and Sarasota Slim made a last minute decision not to go on the 2nd Rock Bottom tour of Scandinavia.

From that point forward Sarasota Slim started fronting his own bands

singing and writing his own songs.

In 1988, Sarasota Slim teamed up with Lucky Peterson

for a wild couple of years of playing and touring the South.

When the original Green Iguana on Westshore opened,

Jessie and Kimbo (representatives from the

Gulf Coast Blues Society) convinced them to have a Monday

The Monday night blues jam at the Green Iguana Westshore

and Benny Sudano on B3 and bass. There are also several live

Appaloosa complete with tours of Europe to promote them.

In 2005 a quick trip to Poland to play a blues festival produced a great live CD by the bass player, band leader and organizer Mark Olbrich.